The 2022 Allied US Migration Report

The Allied Magnet States Report tracks migration patterns in the US. Data shows fewer people moved in 2022 compared to 2021. In fact, moves plummeted in every state, resulting in a 20 percent decrease over last year. Rising rents and interest rates, along with inflation and falling wages, meant people moved less in 2022 than they did during the coronavirus pandemic. Those who could afford to relocate, moved south and settled along the Sunbelt, which offered stronger economic opportunities and a lower cost of living than the West Coast or Northeast. 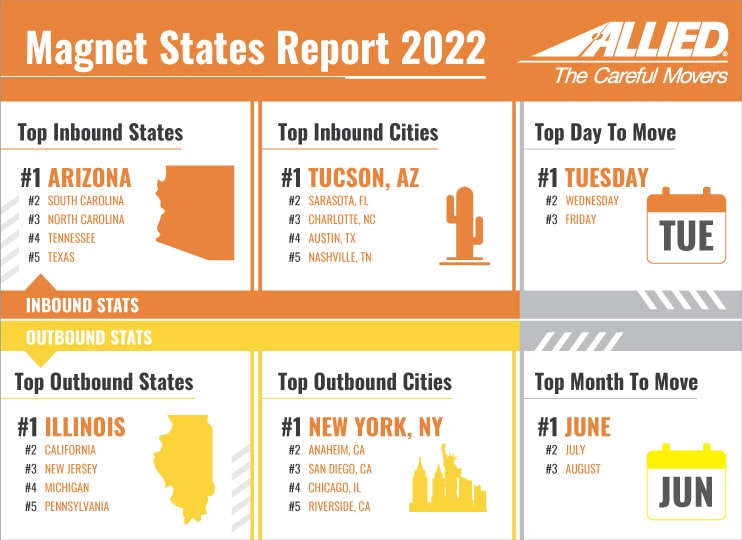 The most moved to states in 2022 were both affordable and offered better financial security, which explains why states like California lost residents to Texas and Arizona. Even though California’s GDP rose eight percent (making it one of the fastest growing economies in the nation, behind only Hawaii and Nevada), its cost of living was extremely high (third behind only Hawaii and Alaska) and its average weekly wages fell by 0.6 percent over the course of the year.

The pattern repeats with unemployment figures. Michigan, Pennsylvania, and Illinois are not expensive states, but have experienced slow job growth compared to North Carolina, South Carolina, and Florida. New Jersey has seen large job growth, but is significantly more expensive than states further south, explaining why it continues to lose population.

The average home price in New York City is 119% above the national average. It’s 140% in Anaheim and 166% in San Diego. Riverside is more affordable, with homes 73% above average. Chicago is an outlier among outbound cities this year, the only one with a housing market below the national average, a sign other factors (e.g. crime, economy) play a more significant role in its migration patterns.

Austin is an outlier among inbound cities. Before the pandemic, its home prices were 48% above the national average, while the other four cities on the list had prices below or close to it. Unfortunately, the recent rush of new residents has pushed up prices in every city on the list except Tucson, whose prices are still below average, which is no doubt one of the reasons why it surpassed Phoenix to become the top inbound city in the state this year.

Suburbs Were More Popular Than Cities

Large cities struggled to attract new residents in 2022. Besides the five listed above, Detroit, Los Angeles, Philadelphia, San Francisco, and Washington D.C. also saw major losses. Even Phoenix, the most popular inbound city in 2021, fell to number six this year.

While housing prices obviously played a role, so did the coronavirus pandemic, which led to more Americans working from home. (Many of the current migration patterns in the US can be traced back to the pandemic.) Now that they no longer need to come into the office, people are free to live where they prefer. Whereas previously they had to stay in the city, now workers can choose to live further out, in communities with cheaper housing and better access to nature.

Before the pandemic, most Americans bought houses 15 miles from their old homes. Today, they're buying houses 50 miles and greater from their old homes, outside major metro areas. Suburbs are cheaper, greener, and offer more living space than cities, hence it’s not surprising consumers are taking advantage of the opportunity and moving out.

Data was provided for all interstate moves that were loaded from January 1, 2016 to November 14, 2022. To maintain comparability with the time frame covered in 2022, only moves loaded by November 14 of each year were included.