Ask Allied: What Furniture Should Be Taken Apart for the Move?

Many of the items in your home have movable or breakable parts, which can be a 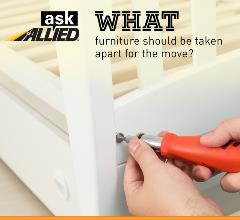 hazard during the moving process. Although large, solid pieces of furniture tend to move just fine on their own, you’ll find that many items travel best when they’re disassembled before they’re loaded.

Each person’s invention will vary, but most find that it’s smartest to take apart these common items during the packing and loading process. And consider help in this process as Allied Van Lines will disassemble and assemble your furniture for you.

>  Bed: Bed frames tend to be pretty large and held together by a series of complicated pieces, which makes them difficult to move. This is especially true if you’ll be moving up or down stairs. Although you don’t have to break your bed down into its barest parts, you may want to separate out the mattress frame from the bed itself or remove drawers.

>  Dresser/Vanity: Most dressers and vanities can be moved intact unless there is a mirror on top. If this is the case, you’ll want to remove the mirror and pack it separately (with special care against the possibility of breakage). The dresser itself should move in one piece, provided you secure the drawers first.

>  Dining Room Table: Large tables *can* be moved in one piece, especially if you get creative with how you wrap it and put it on the truck. However, you might find that it’s easier to remove the legs and move everything that way. You’ll be able to consolidate the furniture better and avoid anything becoming loose or broken.

>  Shelving Units: Most bookshelves and cabinets can be moved intact, but you may want to remove the shelves before you head out. Most units allow you to remove most of the shelves while a few remain in place to anchor them.

>  Everything from IKEA: Okay, this might be a slight exaggeration, but any kind of build-your-own furniture isn’t likely to travel well. The strain will cause the screws and other joints to become loose, and you may find that you arrive with furniture that’s a bit wobblier than it was pre-move. It’s often best to break these items down to their original parts and rebuild them when you arrive.

>  Appliances: You should never tear an appliance apart (especially if you plan to use it again someday), but almost all of them have removable pieces. Refrigerator trays and shelves, washer drums, and dishwasher racks often move better if they’re separate from the appliance itself.

Another important thing to remember is that anytime you take something apart, it’s a good idea to place all the screws and other items in a carefully labeled plastic bag that you tape to the furniture itself. Few things are worse than disassembling your home’s contents only to arrive and find that the screws were lost or mixed up in transit!