Why Are People Moving to Huntsville, Alabama? 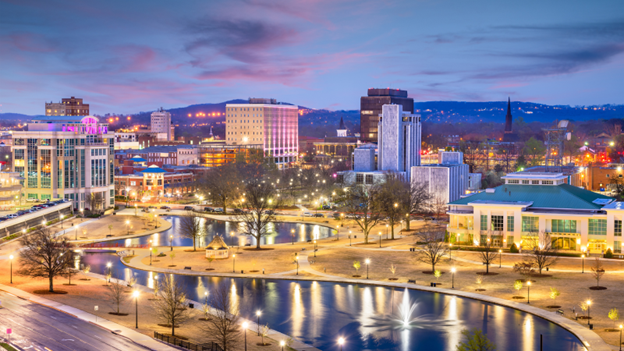 For years, Huntsville, Alabama has flown under the radar. But now it appears the city has caught America’s attention thanks to its prosperous economy, beautiful surroundings, and high-standard of living. It’s frequently listed as one of the best towns in America and as a result, more people are moving in.


The city’s gained roughly 3,200 people a year since 2020 ‒ large numbers for Northern Alabama, which is not a traditionally popular destination. So why are people headed to Huntsville? Why has America suddenly taken notice of this robust yet quiet town?

Huntsville has worked hard to earn its nickname: The Rocket City. It’s been at the forefront of missile and aerospace technology since 1949, when the Ordnance Rocket Center moved its headquarters to the Redstone Arsenal outside town.


The facility now houses the NASA Marshall Space Flight Center, the Defense Missile Agency, and the US Army Space and Missile Defense Command, among many others. In 2026, US Space Command will be headquartered there as well. Boeing, Aegis, Raytheon, Northrop Grumman, Lockheed Martin, and L3 Harris also operate major facilities in the area.


But defense spending isn’t the only thing that fuels Huntsville’s economy. The city is home to over 300 private companies, most of them operating out of Cummings Research Park. It’s the second largest research park in the country. Here you’ll find established companies such as Google, Facebook, and AT&T, as well as high-tech startups and entrepreneurs. Toyota-Mazaa is also moving into the area, bringing thousands more jobs with it.


Not surprisingly, this combination of public and private investment has not only given Huntsville a strong and dynamic economy, it has also driven demand for engineers, scientists, and technicians through the roof. The typical salary for a STEM position is $95,000 ‒ almost 170 percent above the national average. As a result, skilled workers are flocking to the city, transforming it into one of the most successful towns in America.

While Huntsville salaries are high, its cost of living is extremely low. The average house sells for around $220,000, compared to $290,000 in the rest of the country. Food, transportation, and utilities are generally inexpensive as well. Residents also have fewer sales, income, and property taxes to worry about. In short, workers in Huntsville earn more and pay less.

The Huntsville education system is one of the best in Alabama. The city operates over 60 schools, including 9 magnet schools. U.S. News & World Report ranked three of its high schools (New Century Technology High School, Huntsville High School, and Grissom High School) in Alabama’s top 25. Thanks to the district’s emphasis on math, science, technology, and engineering, students score well on academic and standardized tests.


The city also contains two of the state’s top universities: University of Alabama in Huntsville and Alabama A&M. Their engineering, electrical, and mechanical engineering programs are some of the best in the nation. Students have a near 100 percent placement rate after graduation.

As Huntsville’s economy has taken off, so has its cuisine. While the city still offers plenty of good, old-fashioned southern favorites (fried catfish, country fried steak, cheesy browns, and cornbread to name a few), there’s also a wide variety of new and international food to try.


And with so many hard-working people moving into the area, it’s not a surprise breweries and coffee shops have taken off as well. Over two dozen microbrews have opened up in recent years. Check out the craft beer trail to get a taste of the taprooms and beverage shops downtown.


Most residents prefer to start their day at one of the city’s coffee roasters. Whether it’s lattes, dark roasts, espressos, sweet frappes, or a regular cup of Joe, they’ll find it served fresh with a smile and a pastry. Breakfast fiends won’t want to miss the all-day cereal buffet at Dark Side Coffee.


Hike, camp, and climb through thousands of acres of forests. Watch rare, endangered Whooping Cranes. Raft down Sipsey Fork River or catch bass at Lake Guntersville, one of the best freshwater fishing spots in the country. And for residents who want to stay active closer to home, the Land Trust of North Alabama maintains over 70 miles of nature trails around the city.

Huntsville’s small, but it isn’t sleepy. On any given weekend, residents are out enjoying live performances from the Huntsville Symphony Orchestra, Huntsville Ballet, Broadway Theater League, Community Chorus, and Chamber Music Guild.


Similarly, parents and children get a kick at the Fantasy Playhouse, which stages lavish productions of beloved classics like Charlie and the Chocolate Factory and Alice in Wonderland.


For sports fans, Huntsville has a rivalry equaling anything in New York and Los Angeles. Fall is football season in Huntsville. And when the University of Alabama squares off against Auburn, the whole city comes to a standstill. Or, for anyone interested in professional sports, the Tennessee Titans and the Nashville Predators are within easy driving distance.


Golfers will fall in love with the Robert Trent Jones Golf Trail ‒ 26 beautifully designed courses created by one of history’s greatest golf architects. There’s also the Huntsville Botanical Gardens, 118 acres of beautifully sculpted meadows, marshlands, and flowers, not to mention the US Space and Rocket Center, showcasing the history of American space travel.


Party goers look forward to the city’s Annual International Festival, which features great food and music from across the globe, and the Rocket City Brewfest, where they can sample some of the finest hops in the area.


But the city’s biggest attraction is the Lowe Mill ‒ an old cotton mill that’s been transformed into the south’s largest arts, food, and entertainment facility. With over 150 studios, ten eateries, seven galleries, a theater, community garden, distillery, and event space, it is the destination in Huntsville. Come for concerts, classes, exhibitions, and their outdoor market. It’s the perfect place to kick back after a long week.

Despite everything going on in Huntsville, the one thing it doesn’t have is traffic. The city has invested millions in its infrastructure and the effort appears to have paid off. On average, Huntsville commuters spend 19 minutes driving to work. For most Americans, it’s 26.


Melting Pot of the South

Huntsville draws so many people from so many places, it feels like a microcosm of the United States. Living here provides a chance to work, live, and play with people from across the country.